The Project Team as a Relay Team 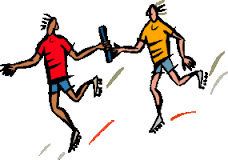 The analogy of a relay race team has been used a few times in project management. It is a great analogy for project teams because it reflects the passing of the baton, from one player to the next, after each player completing a set distance, just as with projects consisting of multiple teams dependent on each other for the ultimate success of completing the project. The passing of the baton, the execution and seamless delivery from handover-to-pickup-and-sprint more often than not (assuming the runners are the same) will account for a win or a lose the race moment.

What triggered me to write this post is not the relay race applied to a project team responsible for execution (typical critical chain analogy of passing information to teams waiting, managing the interfaces so that it's clear, etc.), but rather I wanted to focus more on the actual PMO (project management office) or project management team itself (typically the group of project managers assigned to the project). Where there is a large endeavour, a project of more than 12 months up to say 36 months, those long running projects that have a team of project managers responsible for overall delivery, then with this context too, I believe the relay race analogy is quite apt and relevant. It becomes a relay race for project managers: the baton is passed on to a new project manager, with each passing of the baton, the project receives a burst of new energy, enthusiasm, keeping the project alive. For long-term projects, I believe it is vital to renew the energy by bringing in new people often replenishes the project, breathes new life and momentum...as long as you choose wisely and get the timing just right.

If you're leading a PMO (Project Management Office), you will have at your disposal program managers, project managers & project administrators - all of varying degrees of skills, experiences, competencies, strengths and weaknesses.  Similarly a program manager of a large project, will have have access to a similar compliment of people, making up the project team. Whether you're leading a PMO or a running a program, as the senior project professional, you assume the role of project leader. As a project leader, you create your project management team and are responsible for the life of the team.

Project management teams are no different to other teams. They also go through the stages of development: Forming, Storming, Norming and Performing. They too have their own challenges, just like any other team would. I believe that as a project leader, it is important to keep abreast of your project management team's competencies, you need to be able to gauge the energy of the team and tell when it's time to pass on the baton. Even as a project leader yourself, you might have to pass on the baton to another project leader to see the project through to completion. And I don't see this passing of the baton as a reflection of failure on the part of the manager, it is just a fact of reality. A true leader will know when to move on instead of causing harm to his followers. A project manager should know when its time to pass the baton on to another project manager for the best interest of the project.

On long-term projects, keeping the team in tact can be challenging. Depending how far along the project is in execution, you run the risk of the work becoming routine, rote and uninteresting. Once things become mechanical, which is not a bad thing for the project, but for the human being serving the role as project manager, it might start to get tedious. Of course, I'm not passing a value judgement on all project managers, everyone is different - some people love staying the course, from start-to-finish, must-see-it-deliver mindset, whilst others might want to leave just as the corner is being turned with the project close-to-completion, and all downhill from there.

Examples of Relay Race for Project Management Teams
Looking at the classic PMBOK stages for project life-cycle: Initiation, Planning, Execution, Monitoring & Control and Closure, or, looking at a more broader stages of project leadership: Shaping & Scoping, Start-up, Delivery & Closure - what if your project managers mastered a particular stage of the life-cycle?

With a specialist PM per stage of life-cycle, you play to people's strengths. As much as people might want you to believe that a project manager should be versatile and be proficient with all stages of the project life cycle (heck, that's why there's certification right?) - it has been my experience that this is not the case.

There are some people that are really good at starting projects but not finishing. Some are great at big picture strategy, scoping, shaping and starting-up, but lose interest when it comes to execution and delivery. Whilst some people are great at execution, monitoring and control, but lack the depth, breadth and wisdom of big picture envisioning to dream up a decent project charter, engage in meaningful dialogue with stakeholders and visualising the strategy. Some people are great at detailed mapping of project plans in Microsoft Project, detailed status reporting and tracking but fail to see the big picture. Some people have so much energy to close out the last phase of delivery, but find themselves at a loss when starting a project on a blank piece of paper. Some people experience fatigue mid-way through the project, others are sprinters who love the stress of the last mile.

Yet, when all these people form part of a bigger project team (the project relay team), magic happens. Each PM plays to his/her strength during the project life-cycle, handing over as needed, just-in-time before the project becomes a burden to complete...the project heartbeat is maintained and can live to completion.

So what am I saying then, really? 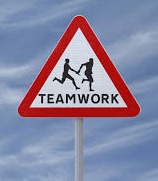 In the past I have handed over my projects as if I was handing over the baton in a relay race. I saw my passing the baton to another project manager as a vital component to the success of the project. A runner can not run the relay race alone, so in the same vain, for large projects that demand a level of endurance of project management execution, you must set yourself up with a project management team that would be capable of passing on the baton...I have in the past, introduced new project managers into my team specifically to introduce "new blood" and new energy as way to prevent project fatigue (it works)...

Past Experience
I once worked on a very large project that lasted about five years, with me joining the project in the second year. The project was one of the best projects I've worked on, it shaped me and thought me the hidden gems of project management that no PMBOK book or certification course will teach you. We were a team of five project managers based in UK, with peer PMs placed in France, India & Israel. Overall the full project team was between 350-500 people. We had a customer that was ruthless and very demanding, the customer also had a complement of 5 PMs in the UK.