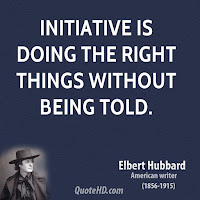 Initiative is doing the Right Thing without being told

Here's another one of Hubbard's short essay that struck a chord with me, on Initiative:

The world bestows its big prizes, both in money and honors, for but one thing. And that is Initiative.

There are those who never do a thing until they are told twice: such get no honors and small pay. Next, there are those who do the right thing only when necessity kicks them from behind, and these get indifference instead of honors, and a pittance for pay. This kind spends most of its time polishing a bench with a hard-luck story. Then, still lower down in the scale than this, we find the fellow who will not do the right thing even when some one goes along to show him how, and stays to see that he does it; he is always out of a job, and receives the contempt he deserves, unless he has a rich Pa, in which case Destiny awaits near by with a stuff club.

To which class do you belong?

Wow, how's that for telling it like it is?? Keep in mind Hubbard's time was at a great stage of industrialisation (and capitalism) - still, take a look at your workplace, your organisation or project team that you're in, and look around - can you spot people that falls into the rough categories that Hubbard proposes?

Of course, times have changed - and in the workplace, we have to be supportive and nurturing, we have to coach, mentor and lead people, if initiative is not present, then we lead by example, inspire and instill confidence, sometimes acting as a protective shepherd would to his flock. Still, this is no easy task, it takes special patience and a level of integrity & leadership to grow people, transforming them from being reactive or bystanders to taking charge, not being afraid of stepping forward to take the initiative.

This is an example of where Leadership defers from Management. One could argue that Hubbard was a classic, no-nonsense manager, who was quite frank, and direct about his expectations. If you can't deliver the message to Garcia, then there's probably no place for you on his team. 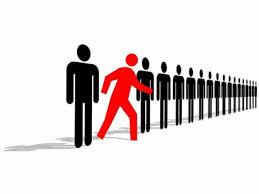 Personally, I find myself caught in between these two styles of "Leadership Management". Depending on the engagement, projects that I work on with really hard delivery deadlines and sometimes unreasonable sense of urgency, one wishes to have more people with Initiative as Hubbard expects. And there are some gigs where it's okay to lead and allow the team to develop along the way.

My natural tendency is to take initiative, as they say "Better to do a thing and ask forgiveness later" - but it doesn't always work out like that. Recently I got my knuckles rapped because I took initiative, acting on cue assuming my client expected me to take his suggestion & run with it...only to be told later that actually, I had to place in executing that activity...So lesson learnt, depending on the stakeholder, in this particular context, the unwritten rule is wait until you're told twice (just in case)...

On the projects I run though, I value people taking initiative, letting me know their intent, and even if they didn't give me the heads up, I look forward to being pleasantly surprised by the team's / person's commitment to solving the problem without being told to do so...
Posted by khanmjk at 7:18:00 am No comments: